Tatyana Leonov takes the Amarok for an art appreciation journey through Kakadu. 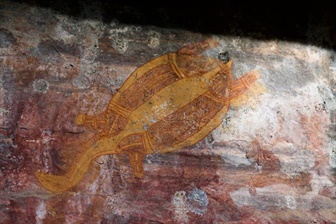 “I think it’s a turtle,” my husband says a little uncertainly, pointing his hand in the direction of a beautiful yellow and orange illustration. The turtle looks a little different to the ones we’ve seen, but later we learn that it’s a depiction of a pig-nose turtle – unknown to science until its discovery in 1968, yet acknowledged by Indigenous Australians for thousands of years. There’s a beautiful ochre illustration of a Tasmanian tiger – a species that became extinct around 4000 years ago in the Territory (which tells us this painting is at least that old). There are illustrations of stick figures carrying boomerangs and spears to hunt their prey – kangaroos, fish, turtles and the like. More recent drawings show the arrival of the Europeans with their guns.

Ubirr is one of Kakadu National Park’s most impressive rock art galleries, home to an abundance of rock art from the freshwater period (within the last 2000 years). My husband and I slowly walk along the bush trail, admiring the illustrations – works of art that offer us a glimpse into the lives of the longest continuing human culture in the world. Our six-month-old is silenced too – Kakadu has that effect on you. 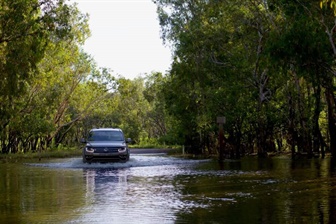 Kakadu is one of Australia’s best 4WD destinations – a huge and spectacular vastness best explored from the driver’s seat. Dramatic weather patterns have created a ravishing landscape that dances with the seasons. When the monsoonal rains bombard the land below, this national park roars into life. Small streams turn into rivers, lakes triple in size, and waterfalls become water eruptions. Jim Jim Falls is one of the magnificent ones – so large and powerful that the only way to see it during the wet season is from the air. We’re traversing the vast land in our Amarok towards the end of the wet season, a beautiful time of the year when storms dissipate and lush green envelopes the park.

The road from Darwin to Jabiru, one of the main tourist hubs in the national park, is smooth and straight… which means I push the pedal a little harder than allowed back home in New South Wales. Northern Territory speed limits are more generous than those at home and the Amarok eases into whatever speed needed smoothly and quietly. From Jabiru to Ubirr things get a little more interesting, thanks to a few creek crossings en route. I see a 2WD struggle in front of us and turn back not willing to try the next crossing, but I easily maneuver our car through the flowing water. Another 4WD follows our lead. This is the fun bit, after all. 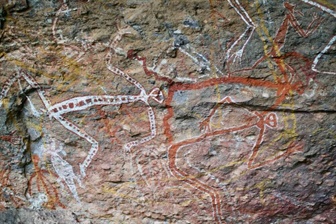 The ancient rock art at Ubirr is just one of the highlights, the second being the lookout. After our rock art stroll, we scramble up the last couple of metres to top of the hill, timing our ascent for just before sunset. We’ve planned well – a kaleidoscope of fiery oranges and neon pinks cloak the sky, making for one heck of a spectacular show. I lift bub into the air to give her some space to move and a passer-by comments that it looks like a scene from The Lion King. Only the music is missing… but the sound of nature is more powerful than any song could be. We’re serenaded by the rustling music of the wind and occasional birdsong. My daughter joins the birds screeching… she’s into making bird noises and here in Kakadu she sounds right at home.

If you’re into birds – that is beyond mimicking their weird and wonderful sounds – Kakadu is the place to go. The national park is home to more than 280 different species, which accounts for a whopping third of all bird species in Australia. There’s even an official Kakadu Birds app created by the National Parks team… which goes to show birds are a big deal here. I download the app and plan to use it, but then get caught up in driving around and exploring. 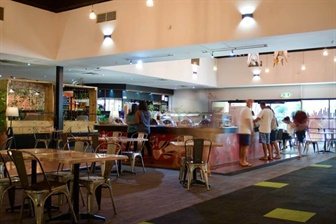 If you’re into birds – that is beyond mimicking their weird and wonderful sounds – Kakadu is the place to go. The national park is home to more than 280 different species, which accounts for a whopping third of all bird species in Australia. There’s even an official Kakadu Birds app created by the National Parks team… which goes to show birds are a big deal here. I download the app and plan to use it, but then get caught up in driving around and exploring.

We base ourselves at the Mercure Kakadu Crocodile Hotel – the legendary crocodile-shaped hotel located in Jabiru. There’s a swimming pool located in the centre of the hotel, where we cool off quite a few times. And we probably spend a bit too much time at the Escarpment restaurant and bar, indulging in bush tucker food and great coffee. For art aficionados, there’s also an art gallery located at the hotel showcasing a collection of Indigenous works, including beautiful illustrations and didgeridoos. We spend a bit of time here too, admiring the craftsmanship.

Our road trip to Kakadu revolves around art and the next day we set of for Burrungkuy (Nourlangie), another one of Kakadu National Park’s outstanding rock art collections. It’s an easy drive along a smooth road and I turn on my holiday Spotify mix as we cruise. du she sounds right at home.

During peak season (from May to September) there’s a free program in the national park that sees rangers and the traditional owners – the Bininj/Mungguy people – guide visitors along rock art walks and cultural activities. We’ve lucked out and arrive just as a tour is starting, so join the crowd of 20 or so people gathered for the walk and talk.

As we follow the gentle trail, we pass shaded rock shelters and see the crevices cut in the form of short-eared rock wallabies. In the Anbangang Gallery we pause for a while, admiring the famous painting of Lightning Man, the Dreamtime ancestor who controls the lightning storms that take place during the wet season. As the tour group disperses, we keep going to Nanguluwu, a small gallery tucked away at the end of the trail. Here we encounter illustrations of animals, ancestral spirits and another depiction of early European settlement in the form a sailing ship. It’s hard to comprehend what Indigenous Australians would have thought when they first saw that vessel nearing their home.

When we jump back into the Amarok there’s a calm quiet. I could say we’re smarter for our trip, but that’s not quite true. We do, however, have a deeper understanding of the land and its people – although we realise there is still so much to learn.

I put my foot on the pedal, my daughter makes one of her bird sounds from the back of the car, my husband maneuvers his seat back and asks: “Where to next?